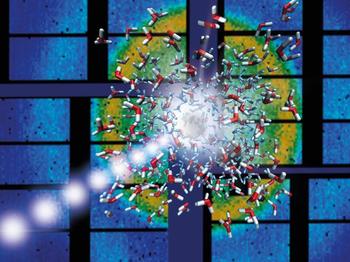 The X-ray flashes of the European XFEL (violet) do not only heat the water (red and white molecules), but also produce a diffraction pattern of the sample (background) from which the state of the water can be determined after each flash. This gives a detailed time history of the process.

Using the X-ray laser European XFEL, a research team has investigated how water heats up under extreme conditions. In the process, the scientists were able to observe water that remained liquid even at temperatures of more than 170 degrees Celsius. The investigation revealed an anomalous dynamic behaviour of water under these conditions. The results of the study, which are published in the Proceedings of the National Academy of Sciences (PNAS), are of fundamental importance for the planning and analysis of investigations of sensitive samples using X-ray lasers.

European XFEL, an international research facility, which extends from the DESY site in Hamburg to the neighbouring town of Schenefeld in Schleswig-Holstein, is home to the most powerful X-ray laser in the world. It can generate up to 27 000 intense X-ray flashes per second. For their experiments, the researchers used series of 120 flashes each. The individual flashes were less than a millionth of a second apart (exactly 0.886 microseconds). The scientists sent these pulse trains into a thin, water-filled quartz glass tube and observed the reaction of the water.

“We asked ourselves how long and how strongly water can be heated in the X-ray laser and whether it still behaves like water,” explains lead author Felix Lehmkühler from DESY. “For example, does it still function as a coolant at high temperatures?” A detailed understanding of superheated water is also essential for a large number of investigations on heat-sensitive samples, such as polymers or biological samples.

“With the X-ray flashes, we were able to heat the water up to 172 degrees Celsius within a ten thousandth of a second without it evaporating,” reports Lehmkühler. Such a boiling delay can normally only be observed up to about 110 degrees Celsius. “But that is not the only anomalous feature,” the physicist emphasises. The scientists investigated the movement of silicon nanospheres floating in the water as markers for the dynamics in the sample. “In the extremely overheated water, we observed that the movement of silicon dioxide nanospheres deviated significantly from the expected random Brownian molecular movement. This indicates an uneven heating of the sample,” says Lehmkühler. Existing theoretical models cannot yet satisfactorily explain this behaviour because they are not designed for water under these extreme conditions.

Thanks to the rapid flash sequence of the European XFEL, the researchers were able to observe the process in extreme detail. “What makes the European XFEL unique is the high repetition rate, that is, the high number of pulses per second”, explains co-author Adrian Mancuso, head of the SPB/SFX instrument at the European XFEL where the experiments took place. “And we have all the instrumentation in place – such as fast cameras, diagnostics and more – to make these experiments possible”. For instance, the Adaptive Gain Integrating Pixel Detector (AGIPD) developed by a DESY-led consortium can take around 350 serial images at intervals of only 220 billionths of a second (nanoseconds).

This setup not only allowed the superheated water to be generated, but also enabled the scientists to carry out precisely controlled series of experiments with X-ray flashes of reduced intensity. “Using silicon filters, we fine-tuned the energy of the pulses so that we were able to control exactly how much the water was heated,” reports Lehmkühler. “For example, we were able to determine how strong the X-ray flashes should be so that the temperature of an aqueous sample remains more or less constant”.

This enables researchers to better plan experiments with heat-sensitive samples at the X-ray laser, for example. On the other hand, the heating effect can also be used in a targeted manner if its exact course is known. The team plans to further investigate these effects also within the framework of the Centre for Molecular Water Science (CMWS), which is currently being set up at DESY.

“Our results not only provide the surprising observation of an anomalous dynamic, but also draw a detailed picture of how aqueous samples heat up in the X-ray laser,” summarises lead researcher Gerhard Grübel from DESY, one of the CMWS coordinators. “In addition, the investigations prove that such serial images are possible at the European XFEL and that its flashes are extremely uniform in every pulse train”.