Pursuing the Trojan horse: Scientists are developing methods for measuring metal in microplastics 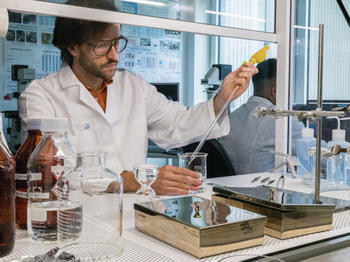 PhD student Lars Hildebrandt works at the Institute for Coastal Research on micro- and nanoplastic particles in the aquatic and marine environment.

There are a relatively large number of studies on the accumulation and transport of persistent organic pollutants by microplastics, which has resulted in good data in this regard. Data, however, on the accumulation of metals that are toxic to the environment are very rare and sometimes scientifically unreliable. In cooperation with colleagues from the German Federal Institute of Hydrology and the Christian Albrechts University in Kiel (CAU), a team of scientists from the Helmholtz-Zentrum Geesthacht – Centre for Materials and Coastal Research (HZG) have developed a method with which such metals can be reliably detected in microplastics.

Microplastics in the environment are viewed as a global problem from more than one angle: on the one hand, laboratory tests have shown that the plastic particles can be toxic, while on the other, particles can serve as a vehicle for the transport of pollutants in the environment. The latter is due to the chemical and physical properties of the microplastics: for example, some pollutants found in rivers or in seawater can accumulate in plastic. Others are already contained within the particles from the manufacturing process so they can carry an entire cocktail of varying substances. This is what the scientists refer to as the “Trojan horse effect”. There have been so far very few scientifically reliable studies on the type and number of metals accumulating in plastic that are relevant in terms of environmental toxicology. Researchers from the Helmholtz-Zentrum Geesthacht (HZG), the German Federal Institute of Hydrology (BfG) and Christian Albrechts University in Kiel (CAU) have now presented in the scientific journal PLOS ONE a validated microwave-assisted method with which the most important types of plastics can be studied in regard to the metals they can contain.

“The basis for reliable scientific determination of metal pollutant transport by microplastics is through validated laboratory methods,” says Lars Hildebrandt, the study’s first author and doctoral candidate in the HZG’s department for Marine Bioanalytical Chemistry. “The new methods can now quantify over fifty different metals in microplastic particles.”

For their measurements, Hildebrandt’s team used certified plastic reference materials in the microplastic size range up to five millimetres. With these materials, the scientists know exactly which metals are contained in the materials due to the production process and should therefore appear in the results. The researchers treated the materials with various combinations of strong acids and heated them with microwave radiation until the respective material completely dissolved. In this way, they were able to determine a suitable acid mixture with which all examined materials are reliably dissolved. The samples were then studied using a mass spectrometer. Which elements and what quantities contained in the sample could then be verified.

Metals detectable from plastic production and the environment

In the microplastic particles the new method can be utilized to detect both the metals used in plastic production and those that can bind to the particles from the environment, such as from seawater. For example, the metalloid antimony is often used as a catalyst for the production of PET and can therefore be found in the plastic itself. Heavy metals such as cadmium and lead, which are toxic for many organisms, can also be present from the production process, but can also be bound to the surface of the particles from the environment.

The approach presented in the study was used just recently to track metal-labelled nanoplastic particles in a test system.

In the next step, the scientists now plan a targeted deployment of microplastic samples in the Elbe estuary and at specific points in the river. Containers are to be placed on a rack, which in simplified terms can be thought of as specialized tea eggs, which contain the sample material. “What interests us is which metals from the water bind to the surface of the plastic, something scientists refer to in this context as 'sorption’.” We will then take samples at regular intervals in order to measure the concentrations in the plastic with our new method and thus investigate the accumulation over time,” explains chemist Hildebrandt on the future outlook.