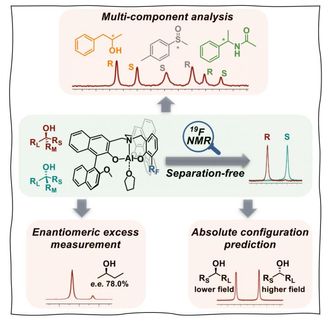 Researchers from the Shanghai Institute of Organic Chemistry of the Chinese Academy of Sciences recently developed a new platform for rapid chiral analysis, producing chromatogram-like output without the need for separation. The study was published in Cell Reports Physical Science.

Molecules not superimposable on their mirror images are chiral and play essential roles in the pharmaceutical industry, material sciences, and the origin of life. Distinguishing between mirror-image molecules is in great demand, but existing approaches usually achieve this goal with compromise in accuracy or efficiency.

In this study, the researchers developed a series of 19F-labeled chiral aluminum complexes that reversibly bind to various Lewis basic analytes.

The method is operationally simple and effectively resolved a wide range of chiral molecules, including alcohols, ethers, amides, carbamates, oxazolidinones, sulfoxides, and sulfoximines.

The study shows that simultaneous analysis of three different classes of chiral compounds can be achieved in the absence of separation.

According to the researchers, the new method may also be used to determine the enantiopurity of crude reaction products and the assignment of absolute configurations. When used in conjunction with an autosampling NMR spectrometer, greater than 1,000 chiral analyses can be performed in a day.

"Such a method has the potential to simultaneously identify multiple analytes and existing interferences, which may eventually lead to real-time chiral analysis in complex biologically relevant systems," said ZHAO Yanchun, corresponding author of the study.