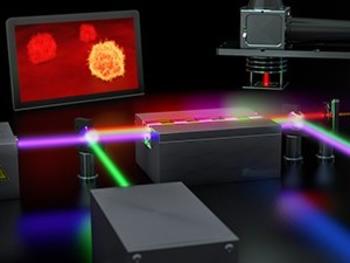 Quantum imaging setup for the microscopic examination of cancer cells.

Entangled photons can be used to improve imaging and measurement techniques. A team of researchers from the Fraunhofer Institute for Applied Optics and Precision Engineering IOF in Jena has developed a quantum imaging solution that can facilitate highly detailed insights into tissue samples using extreme spectral ranges and less light.

While optical analysis techniques such as microscopy and spectroscopy are extremely efficient in visible wavelength ranges, they quickly reach their limits in the infrared or terahertz range. That, however, is precisely where valuable information is hidden. For example, bio-substances such as proteins, lipids and other biochemical components can be distinguished based on their characteristic molecular vibrations. These vibrations are stimulated by light in the mid-infrared to terahertz range and are very difficult to detect with conventional measurement techniques. “If these motions could be captured or induced, it would be possible to see exactly how certain proteins, lipids and other substances are distributed in cell samples. For example, some types of cancer have a characteristic concentration or expression of certain proteins. This would mean that the disease could be detected and treated more efficiently. More precise knowledge of the distribution of bio-substances could bring major advances in drug research, as well,” says quantum researcher Dr. Markus Gräfe from Fraunhofer IOF.

But how can information from these extreme wavelength ranges be made visible? The quantum mechanical effect of photon entanglement is helping the researchers allowing them to harness twin beams of light with different wavelengths. In an interferometric setup, a laser beam is sent through a nonlinear crystal in which it generates two entangled light beams. These two beams can have very different wavelengths depending on the crystal’s properties, but they are still connected to each other due to their entanglement.

“So now, while one photon beam in the invisible infrared range is sent to the object for illumination and interaction, its twin beam in the visible spectrum is captured by a camera. Since the entangled light particles carry the same information, an image is generated even though the light that reaches the camera never interacted with the actual object,” explains Gräfe. The visible twin essentially provides insight into what is happening with the invisible twin.

The same principle can also be used in the ultraviolet spectral range: UV light easily damages cells, so living samples are extremely sensitive to that light. This significantly limits the time available for investigating, for instance, cell processes that last several hours or more. Since less light and smaller doses of radiation penetrate tissue cells during quantum imaging, they can be observed and analyzed at high resolution for longer periods without destroying them.

“We are able to demonstrate that the entire complex process can be carried out in a way that is robust, compact and portable,” says Gräfe. The researchers are currently working to make the system even more compact, shrinking it to the size of a shoebox, and to further enhance its resolution. The next step they hope to achieve is, for example, a quantum scanning microscope. Instead of the image being captured with a wide-field camera, it will be scanned, similar to a laser-scanning microscope. The researchers expect this to yield even higher resolutions of less than one micrometer (1 µm), enabling the examination of structures within individual cells in even greater detail. On average, one cell measures roughly ten micrometers in size. In the long term, they want to see quantum imaging integrated into existing microscopy systems as a basic technology, thus lowering the barriers for industry users.

The demonstrator is one of the results of the Fraunhofer lighthouse project QUILT, which pools the quantum optics expertise of the Fraunhofer Institutes for Applied Optics and Precision Engineering IOF, for Physical Measurement Techniques IPM, for Microelectronic Circuits and Systems IMS, for Industrial Mathematics ITWM, of Optronics, System Technologies and Image Expoitation IOSB and for Laser Technology ILT.