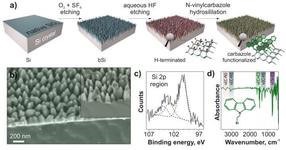 Scientists from Far Eastern Federal University (FEFU), Far Eastern Branch of the Russian Academy of Sciences, Swinburne University of Technology, and Melbourne Center for Nanofabrication developed an ultrasensitive detector based on black silicon. The device is able to detect trace amounts of nitroaromatic compounds and can be applied to identify the majority of explosives or highly toxic pollutants for medical and forensic evaluations.

The novel sensor is based on the so-called "black silicon" that is fabricated by high-performing reactive etching of commercially available silicon substrates. Such etched silicon has a nanostructured spiky surface exhibiting unique optical properties. After etching, the surface is covered with a monolayer of carbazole molecules. This process is called chemical functionalization since the attached molecules impart the substrate a certain important function, namely, the ability to bind and concentrate nitroaromatic compounds on the surface. The carbazole monolayer renders the device sensitive to such widely spread nitroaromatic substances as nitrobenzene, o-nitrotoluene, 2.4-dinitrotoluene, etc. However, the sensor does not react to the presence of other molecules, such as benzene, toluene, tetrachloromethane, methanol, ethanol, and so on.

"Nitroaromatic compounds can be found in the waste waters of paint plants or military facilities and are extremely dangerous for the environment. Moreover, they are parts of many explosives as well. Their detection in trace concentrtion represents an important and complex practical task. Our sensor platform identifies the presence of nitroaromatic compounds by means of registering the changes in the luminescence spectrum of the functional layer of carbazole that selectively reacts to nitroaromatic molecules," said Alexander Kuchmizhak, a research associate at the VR and AR Center of the Science and Technology, FEFU.

According to the scientist, nanostructured black silicon used as the basis of the device gives it high sensitivity and an unprecedented dynamic measurement range. In the lab the sensor is able to provide information about the presence of toxic molecules in liquids or gases within several minutes.

"Combination of unique morphological and optical properties of black silicon being combined with easy-to-implement methods of surface chemistry used to functionalize silicon surface with carbazole molecules allowed to achieve unprecedented sensitivity. Our sensor is able to detect nitroaromatic compounds at concentrations down to ppt (part per trillion or 10-10 %). Extremely broad dynamic measurement range is caused by the unique spiky morphology of black silicon that provides uneven local concentration of carbazole molecules creating surface sites with different sensitivity," explained Alexander Mironenko, the designer of the sensor, and a senior research associate at the Institute of Chemistry, FEB RAS.

Scientists stated the manufacture of the new sensor platform is expected to be quite cheap compared to the existing analogs. Moreover, the same sensor can be used multiple times. It can become a part of gas sensor systems that secure public and ecological safety.