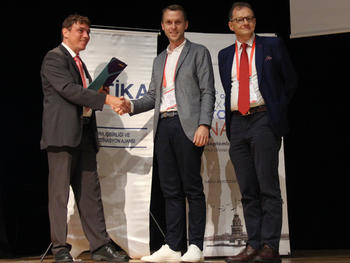 “With his groundbreaking investigations revealing the molecular mechanisms established by viruses to hijack the cellular barrier and enter the cell, David Alsteens joins a prominent group of innovative Heinrich Emanuel Merck Award winners,” said Klaus Griesar, head of Science Relations at Merck. “Perhaps in the future, his research could be used to develop a new tool to quantify the effects of molecules that interfere with the entry of viruses, and thus support the development of new drugs against viral infections.”

Alsteens has made a mark internationally through his work on the nanomechanics of living systems. He has conducted groundbreaking research on nanomechanical mapping of the first binding steps of a virus to animal cells using a combination of atomic force microscopy (AFM) with confocal microscopy. Alsteens has described his inventions in one granted patent and in a second filed patent.

The winner is currently Research Associate at the Fund for Scientific Research and Professor at the Faculty of Bioscience Engineering at UCLouvain. He completed his Ph.D. thesis in nanobiotechnology at the Institute of Condensed Matter and Nanosciences of the UCLouvain in 2011and spent two years at ETH Zurich in Basel, Switzerland, as a post-doc.

The cell plasma membrane is a highly complex interface between the cell’s interior, the cytoplasm, and the extracellular environment. It serves as a barrier as well as a versatile and essential signaling interface. Within this context, probing how ligands (peptides, drugs or viruses) interact with native membrane receptors in physiologically relevant conditions is of fundamental interest in many disciplines of biology, including cell biology, molecular biology, structural biology, biochemistry, and biophysics.

To address the question of how receptors in the cell wall interact with biomolecules (for example on the surface of a virus) Alsteens introduced the use of force-distance curve-based AFM, a technique to simultaneously image mammalian cells and quantify their dynamic binding properties to specific ligands. In addition, he recently combined the methodology with confocal microscopy to simultaneously monitor the cellular characteristics, for example cell state, distribution of cell surface receptors.

Alsteens’ breakthrough was to simultaneously record the energy landscape of ligand-binding to specific receptors with high-resolution AFM imaging of cell surface in native conditions.

Since 1988, the Heinrich Emanuel Merck Award for Analytical Science has been recognizing scientists under the age of 45 whose work focuses on new methods in chemical analysis and the development thereof in applications aimed at improving the quality of human life, for example in fields such as life sciences, environmental protection and biosciences.