Risks and Hazards Caused by ELECTROSTATICS in the LAB?!

In contrast to popular belief, electrostatics – also often referred to as frictional electricity – does not result from friction, but from the separation of surfaces which previously were in close contact with each other. Close, in this context, refers to a situation in which there must be a contact surface, a (sometimes brief) retention time and a distance between the surfaces of max. 10 nm.

Depending on the respective conductivity or position in the tribo-electrical spectrum, materials tend to absorb charge particles on the surface or to transfer these to the neighboring surface. Conductive materials act in this context as electron suppliers (donators), and insulating materials absorb the charge particles (acceptor). 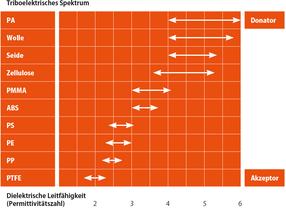 If the surfaces are separated quickly following such a transfer of charging, and at least one of these materials is a bad electrical conductor, the charging transferred cannot return to the original place. These charging particles which have not retuned remain on the one surface and generate a charging excess, while on the other surface they are missing which results in a lack of charging. This generates a tension which can swiftly reach the kV region.

Therefore, electrostatics is always a surface effect and takes place on a molecular or atomic level.

In the case of solids it is easy to identify separating processes which could result in charging. Normally, visible movements can be identified. The withdrawing of foil, pouring out a product from a drum, removing synthetic clothing (fleece, polyester), which are separated from the body, all of these procedures lead to perceptible and partially visible charging and discharging.

A precondition for charging separation, however, as already explained is that at least one of the materials involved must be a poor electrical conductor. The category of poor conductors (also referred to as ‘insulants’) include most synthetics such as PE, PVC, PVDF, PTFE, etc. In the case of solids, we do not refer to conductivity (unit: S/m) but to resistance (unit: Ωm). Siemens/meter is the inverse of Ohm meter which means the values can be directly compared. Therefore, low conductivity corresponds to high resistance.

In an electrostatic context, liquids can also be differentiated and these also include substances with a high resistance, i.e. a poor electrical conductivity.

These include e.g. aliphatic / aromatic hydrocarbons such as ether as well as common solvents such as Toluol, n-heptane, n-hexane, xylole etc.

Some nitriles (for example, acetonitrile) play a special role and also some esters which lead to unexpectedly high charging, despite relatively good conductivity. This is an effect which is relatively unknown  and which has hardly been researched up to now. Therefore, electrostatic protection action is also of specific importance for these substances.

In contrast to solids, surface separation in liquids is not always identifiable as such.

The glass tube filled with liquid or the semi-transparent HPLC active with static medium is difficult to differentiate from that with a flowing medium.

And even it were: the liquid column remains in full contact with the interior wall of the tube / pipe. And no surfaces are separated, are they?

A widespread misconception, because in contrast to solids and their rigid molecular lattices, molecules of liquids move freely around. Molecular contact followed by a separation of wall and liquid takes place merely via the movement of the liquid (conveying, mixing, pouring...).

Such effects are enhanced by surface roughness, flow-impeding items and cross-section changes and this increases charging of the system.

Fig. 3: Charging separation on a molecular basis during conveying

Certain volumes and (separation) speeds are of course required to generate the charging process. In the case of conveying in closed systems, for example, a speed of < 1 m/s is considered uncritical since up to this value there is a balance between charging transfer and charging return. This limit, however, does not apply in the case of open pouring, since different volume to surface ratios apply in such cases and a charging return is excluded on account of the stopping of liquid.

Filling a test tube from a lab wash bottle does not fulfill the criteria which result in critical electrostatic charging. Even though the wash bottle is made of insulating material (normally LDPE, HDPE).

However, if a larger volume is conveyed at greater speed, charging can occur. Such a situation is conceivable for example, in capillaries and tubes of HPLC systems, especially if several of these tubes are to be combined and the waste solvent flow is bundled and increased. The respective separation and charging procedures may be so strong that an electrostatic field is generated around the conveying tubes. If there are conductive, non-earthed components (e.g. metal parts) located in the effective range of such a field, these are then subject to a charging polarization.  This means that polarity of the opposing character accumulates  towards the field, while the compatible polarity is repelled.

This displacement effect of charging particles in the non-earthed conductive components may be so strong that discharging of the charging excess or – depending on the polarity – a balancing of the charging shortage may take place towards the next ‘grounding’. Both processes normally occur in the form of sparks.

A classical example for charging via influence are metallic components such as screwing or brackets on liquid-conveying tunes made of insulating material. 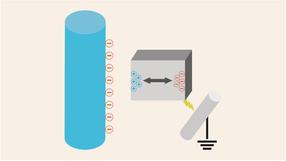 Fig. 4: Polarization of conductive, non-earthed parts via ‘influence’. This may result in charging balancing via spark discharge

Charging is also possible when pouring out liquids which flow over surfaces and the collect in containers (e.g. waste solvents poured into a collection container via funnels). The funnel may charge in a polarity as a result of the separation process between liquid and funnel.

The liquid loaded in opposite direction collects in the container and transfers its charging to the container. If the funnel and the container are not connected electrically/electrostatically, there is a different charging potential in the two components, i.e. a tension, which can discharge in the form of a spark. This results in an ignition risk.
Damages caused by electrostatic charging and discharging when refilling liquids and solvent waste are well known and have been verified. 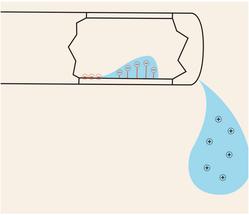 There are three different types of electrostatic discharge relevant for lab work. A risk assessment which takes these three discharge types into consideration, assesses them and specifies protective action can provide protection against electrostatic risks.

The most frequent type of discharge is spark discharge, which always occurs if conductive materials are charged via separation processes with insulating materials on their respective surfaces or via ‚influence’. These charged, conductive objects may be

if their respective charging cannot flow out.

Charging accumulates as in a condenser. When tension is high enough, there is a charging balance to another conductive object of a different potential (normally to ‘earth’). 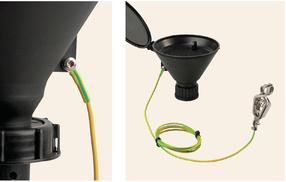 The second relevant discharge type is brush discharge. This occurs on insulating material surfaces which have been charged via separation processes such as rubbing, wiping, removal of protective foil etc. or via spraying.
Insulating solids surfaces can only be charged via such surface processes. Charging via influence does not occur with insulating material, since there is no shifting / polarizing of charging particles in the material on account of poor conductivity.

If, for example a charged insulation material surface is provided with a grounding conductor as a result of an approaching metal object or person, the electrostatic field bundles towards this grounding and there is a spark which ramifies towards the surface – brush discharge.

Depending on the respective material (for example, explosion group IIC) and the probability of occurrence of ignitable solvent vapour-air mixtures (for example ‘occasionally’ / Zone 1), an insulating material surface > 20 cm² may be assessed as critical.

Drums such as canisters, bottles etc, or auxiliary means of insulating material may have a manufacturer release for use for flammable solvents, though respective operator must be aware of the risk and must observe the instructions and conditions of use of the manufacturer (e.g. ‘No dry wiping permitted’…’only appropriate use’ etc.).

To protect yourself from brush discharge, insulation material surfaces must not be charged via rubbing, wiping or similar processes if there are also flammable vapours.

Alternatively you should use conductive or electrostatic conductive materials since these can relieve their charging non-critically in case of connected grounding. This means that there is no basis for brush discharge, since there is no charged insulating material surface. 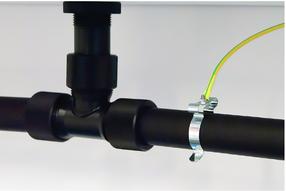 The third discharge type observed in labs is propagating brush discharge. This mainly occurs inside systems and on insulating material surfaces, if at the same time there are ‘strong charge generating processes’.

Such conditions are fulfilled, for example, in insulating tubes via which aerosols or solid particles are conveyed at high speed.

Such a tube in which propagating brush discharge has occurred normally reveals a dark trace several centimeters long with concentration on the center which results in a perforation of the wall as a result of the penetration of the discharge. Propagating brush discharge has sufficient energy to ignite fuel-air mixtures of any kind. Since several conditions are required for the occurrence of this discharge type, its probability of occurrence is relatively low. If in doubt, consult an expert.

Since propagating brush discharge only occurs in insulation material surfaces, use of conductive or electrostatic conductive transport or conveying systems is also adequate protective action in this case.

Electrostatics and its ignition risks is a very complex issue. Requirements are well regulated for parts and components in so-called Ex-ranges, i.e. zones which have been defined as Ex-relevant because ignitable atmospheres can occur in such zones more frequently and in a larger dimension.

In sections with high levels of air change and lower solvent volumes, which are not defined as ex-zones, it must also be ensured there is no electrostatic ignition source in the area of emissions or in the area where solvents are handled in the open. Any electrostatic discharge occurring in such an area would automatically cause an ignition of the mixture and, in the worst case, cause the canister to explode.

Such an emission should be avoided, for example, by using appropriate filter systems. If this is no possible, it must be ensured that at the place of solvent emission or the area of open handling of such substances (for example, waste solvent collection places) no electrostatic risk can develop.

Electrostatic requirements of the aforementioned ex-zones are regulated in the ‘Technical Rules for Operational safety’ abbreviated to TRBS 2153 entitled ‘Avoiding Ignition Risks resulting from electrostatic Charging’. This TRBS describes risks and specifies protective action. Therefore, the contents of the Technical Rules TRBS 2153 are useful here as an source of information and can be referred to if you have any questions.

Kurt Moritz is Expert for Electrostatics and mechanical Explosion Prevention at the technical System safety Division of Merck KGaA, Darmstadt.

Request information now
More about SCAT
Most read white papers
other
Topics A-Z
All topics
Your browser is not current. Microsoft Internet Explorer 6.0 does not support some functions on Chemie.DE