Abstract
Polyether-modified silicones have a long history of use in the personal care industry as emulsifiers and dispersants, as well as stabilizers for water-in-oil systems. However, because of their external phase type, water-in-oil systems tend to display poor aesthetics, such as greasiness, tackiness and slow absorption. A new polyether-modified silicone, PEG/PPG-19/19 dimethicone (and) C13-16 isoparaffin (and) C10-13 isoparaffin, was evaluated for its potential to aid in the production of stable water-in-silicone and water-in-oil formulations with unique textures and enhanced aesthetics. Various oil phases were studied, including silicone oils, organic oils, and a combination of both. Results of the evaluations demonstrate the versatility of the new material, and prototype formulations illustrate its broad utility.

Polyether-modified silicones, or silicone polyethers (SPEs), have been widely used in the personal care industry for many years because of their water solubility and their emulsifying and dispersing abilities. They are particularly useful for stabilizing water-in-oil systems, which offer several benefits for cosmetic applications, including resistance to wash-off, uniform coverage, emolliency, and spreadability. Skin protection and water repellency make SPEs suitable in applications such as moisturizing creams, sun care products, color cosmetics, and hair conditioners.

Despite their utility and benefits, water-in-oil systems can present stability challenges, and they can have poor aesthetics. The use of SPEs allows the combination of emulsion stability with pleasant aesthetics. SPEs can be delivered either as pure material or in a carrier, most often volatile silicone fluids including cyclopentasiloxane. This article provides an overview of studies designed to assess the properties of a new SPE and carrier system, describes how the studies characterize the new material, and illustrates potential applications.

New Options for Silicone Polyethers
Recent work has focused on developing SPEs in a broader range of carrier fluids, which would allow more flexibility in formulating different oil phases. Among these carriers, C13-16 isoparaffin (and) C10-13 isoparaffin has raised specific interest.

The properties of the new emulsifier, PEG/PPG-19/19 dimethicone (and) C13-16 isoparaffin (and) C10-13 isoparaffin, were evaluated for the production of stable water-in-oil and water-in-silicone formulations with unique textures. Various oil phases were studied, including silicone oils, organic oils, and a combination of both.

Other key cosmetic raw materials such as pigments and sunscreens were evaluated in formulation prototypes. The level of SPE ranged from 2 to 50%, depending on the formulation. Studies show both cold and hot processes can be used to produce textures ranging from creams to gel-like products, liquids to viscous emulsions, soft to hard gels, and clear to opaque gels.

SPE Shows Formulating Versatility
These studies demonstrate that stable formulations can be obtained using PEG/PPG-19/19 dimethicone diluted into an organic carrier as an emulsifier. An additional benefit derived from the dilution of the SPE into an organic carrier such as the current combination of C13-16 isoparaffin (and) C10-13 isoparaffin is greater flexibility in the choice of the oil phase, from silicone oils to organic synthetic oils, vegetable oils, triglycerides or esters.

Formulation 1 illustrates how the hardness of clear gels can be varied based on use levels of the SPE. For additional variation, the dimethicone could be replaced by other silicones such as trisiloxane or caprylyl methicone. The use of PEG/PPG-19/19 dimethicone (and) C13-16 isoparaffin (and) C10-13 isoparaffin in combination with a low level of water allows the creation of clear gels, where the viscosity is impacted by the level of SPE emulsifier and water incorporated. Increasing the level of the SPE or water increases the viscosity of the gel, whereas increasing the water level decreases clarity.

In Formulation 2, the combination of the SPE as a water-in-silicone emulsifier with C30-45 alkyldimethylsilyl polypropylsilsesquioxane creates a facial cream that imparts a smooth feel to the skin. The resin wax forms a velvety film and provides an additional structuring effect to the formulation. 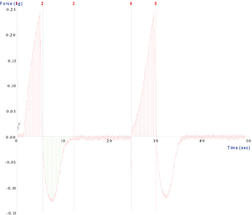 full-screen
The impact of the PEG/PPG-19/19 dimethicone (and) C13-16 isoparaffin (and) C10-13 isoparaffin on the texture of Formulation 2 was evaluated with a texture analyzer (TA.XTplus Texture Analyser, Stable Micro Systems Ltd., Surrey, UK). Figure 1 shows the texture profile for this formulation. The force for the probe to penetrate the product is similar the first and second time, which means the cream shows good cohesiveness. The time for the probe to withdraw from the product is slightly higher than the time to enter; this means the cream is adhesive but not sticky.

A rheometer (CSL² 500 Carri-Med, TA Instruments, New Castle, DE, USA) was used to evaluate the effect of shear on the viscosity of the facial cream in Formulation 2. Figure 2 illustrates the results. The viscosity recovers well after an increase of shear.

Formulation 3 demonstrates how PEG/PPG-19/19 dimethicone (and) C13-16 isoparaffin (and) C10-13 isoparaffin can be used to create an easy-to-spread, water-in-silicone foundation.

The nontacky afterfeel of this cream makeup results from formulating the SPE in the presence of pigments.

As Formulations 4 demonstrates, PPG-19/19 dimethicone (and) C13-16 isoparaffin (and) C10-13 isoparaffin allows the formulation of water-in-silicone or water-in-oil sun creams that contain mineral and organic sun filters. The resulting nongreasy sun cream leaves a smooth afterfeel on the skin.

Conclusions
Results of these studies show that stable formulations can be obtained using PEG/PPG-19/19 dimethicone diluted into an organic carrier as emulsifier. Additional benefits derived from the dilution of the SPE into an organic carrier such as the current combination of C10-13 isoparaffin (and) C13-16 isoparaffin allow greater flexibility in the choice of the oil phase, from silicone oils to organic synthetic oils, vegetable oils, triglycerides or esters.

Request information now
Facts, background information, dossiers
More about Dow Corning
Most read white papers
other
Topics A-Z
All topics
Your browser is not current. Microsoft Internet Explorer 6.0 does not support some functions on Chemie.DE