Immunoglobulins or antibodies are proteins that are involved in the immune response. They bind with high affinity at exogenous substances (antigens). Immunoglobulins (Ig) are classified according to the structure. The most present antibody in plasma is IgG. It is part of the secondary antibody response and is built 3 weeks after antigen recognition. There are several assays for the determination of IgG commercially available. This application note shows the detection of IgG using an AlphaLISA® assay performed on BMG LABTECH’s PHERAstar Plus.

The AlphaLISA® technology from PerkinElmer is based on the AlphaScreen® detection method: Upon laser excitation at 680 nm of Donor beads ambient oxygen is converted into singlet oxygen released at a rate of up to 60,000 molecules per second. Singlet oxygen molecules have a short lifetime (4 µs in aqueous solutions) and diffuse of no more than 200 nm. When a biomolecular interaction brings the Donor and Acceptor beads in proximity, the singlet oxygen reaches the Acceptor bead and a cascade of chemical reactions is initiated producing a greatly amplified luminescence signal. The assay principle of the IgG AlphaLISA® assay is given in Figure 1. 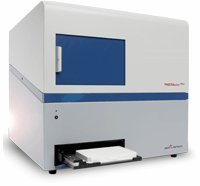 The IgG AlphaLISA® standard curve was performed in accordance with the kit protocol. Briefly, a serial dilution of lyophilized IgG was prepared in AlphaLISA® immunoassay buffer. A mix of Acceptor beads and biotinylated antibody were added to each of the 12 standards and to the blank (contains no IgG). Following 60 min incubation at room temperature, Donor beads were added. As Donor beads are light sensitive this step has to be done under subdued or green light. After another 30 min of incubation in the dark the AlphaLISA® signal is measured in the PHERAstar Plus. BMG LABTECH has developed an AlphaLISA® specific optic module and the instrument settings for a 384-well plate can be found below.

850 µL of each standard and blank were prepared in vials. After incubation a certain amount of reaction mix was transferred into the two different types of 384-well microplates. 50 µL were used for the 384-well standard plate and 17 µL were the final volume in the 384-well small volume plate. Each plate consisted of 12 replicates for both the standards containing different IgG concentrations and the blank. Because of the different fill heights it is recommended to perform a focus adjustment once for every plate type. The focal height will be optimized resulting in the highest possible sensitivity. 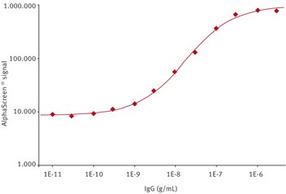 For low concentrations the linear - linear scale is preferred (Figure 4). With the MARS data analysis software both standard curves can easily be plotted. 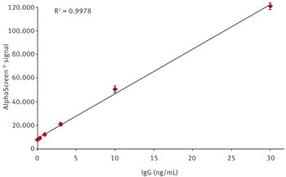 Fig. 4: A linear-linear chart at low IgG concentrations obtained with the MARS data and analysis software.

Z’ values, a standard in evaluating HTS methods, and the limit of IgG detection were calculated for both plate types (Table 1). The formulas for both calculations are given below.

The limit of detection (LOD) was determined by interpolating the average blank values + 3x the standard deviation of the blank on the standard curve (4-parameter fit).

The IgG AlphaLISA® detection kit was successfully performed on the PHERAstar Plus. The sensitivity stated by the kit manufacturer was reached in 384-well standard plates and was slightly better than in 384-well small volume format. Nonetheless, we could show that it is possible to decrease the assay volume to 17 µL with good sensitivity and very good Z’values.
The multidetection HTS reader PHERAstar Plus shows great performance in AlphaScreen® and AlphaLISA® mode in 384-well small volume plate format. The easy to use software allows simple assay optimization regarding sensitivity and read times. The PHERAstar Plus has been designed to read all HTS detection modes (fluorescence intensity, timeresolved fluorescence, fluorescence polarization, luminescence, AlphaScreen®, and absorbance) in all plate formats up to 1536 wells.

Request information now
Facts, background information, dossiers
More about BMG Labtech
Most read white papers
other
Topics A-Z
All topics
Your browser is not current. Microsoft Internet Explorer 6.0 does not support some functions on Chemie.DE