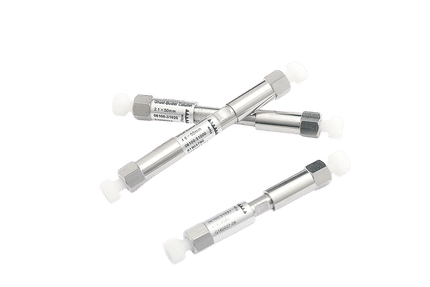 During HPLC analysis, especially gradient elution or after long-term system usage, some unexpected peaks, often called "Ghost Peaks", may appear in the chromatogram.

Welch Materials is delighted to announce the launch of Ghost-Buster II Column, an upgraded and improved Ghost-Buster column, which can absorb mobile phase impurities and eliminate ghost peaks. At the same time, baseline drift caused by a high proportion of aqueous solvent in the gradient program is minimized. When the initial proportion of aqueous phase is high (generally more than 95%), using conventional GB columns can remove impurities effectively. But some ghost peaks may still occur when the proportion of mobile phase has a drastic change in a few minutes or the baseline has large fluctuation. By improving the overall design of the Ghost-Buster II Column, the mobile phase is fully mixed before entering the HPLC column, greatly reducing the baseline fluctuation and drift.

For analysts who have chromatograms suffering from ghost peaks,the Ghost-Buster II Column is a great solution.

Find out More in the Video

More about Welch Materials
Top products
other
Topics A-Z
All topics
Get in Touch with the Supplier Now: Request information or a quote Download brochure